Climate-change litigation is heating up. Will the legal strategy that brought down Big Tobacco work against Big Oil?
by
Stephan Faris 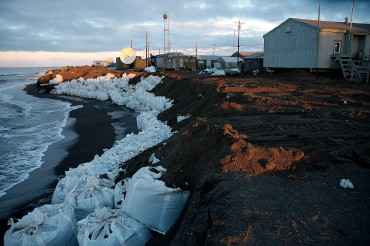 During the tobacco wars of the 1990s, attorneys Steve Susman and Steve Berman stood on opposite sides of the courtroom. Berman represented 13 states in what was then seen as a quixotic attempt to recover smoking-related medical costs, and conceived the strategy that would break the tobacco industry’s back: an emphasis on charges of conspiracy to deceive the public about the dangers of cigarettes. Susman had turned down offers to represent Massachusetts and Texas against the cigarette makers; instead he defended Philip Morris–until 1998, when the industry settled for more than $200 billion, the biggest civil settlement ever. Now, a decade later, the two lawyers find themselves on the same side of the aisle, working on a case that seems just as improbable as the ones that brought down Big Tobacco ever did–and with implications that could be at least as far-reaching.

The Eskimo village of Kivalina sits on the tip of an eight-mile barrier reef on the west coast of Alaska. Fierce storms are ripping apart the shores. Residents report sinkholes in nearby riverbanks. Despite emergency erosion-control efforts, the crumbling coast threatens the village’s school and electric plant. In 2006, the U.S. Army Corps of Engineers concluded that Kivalina would be uninhabitable in as little as 10 years, and that relocating its approximately 400 residents would cost at least $95 million. Global climate change, the Corps report said, had shortened the season during which the sea was frozen, leaving the community more vulnerable to winter storms.

For the rest of the article, visit the Atlantic online here:
http://www.theatlantic.com/doc/200806/conspiracy